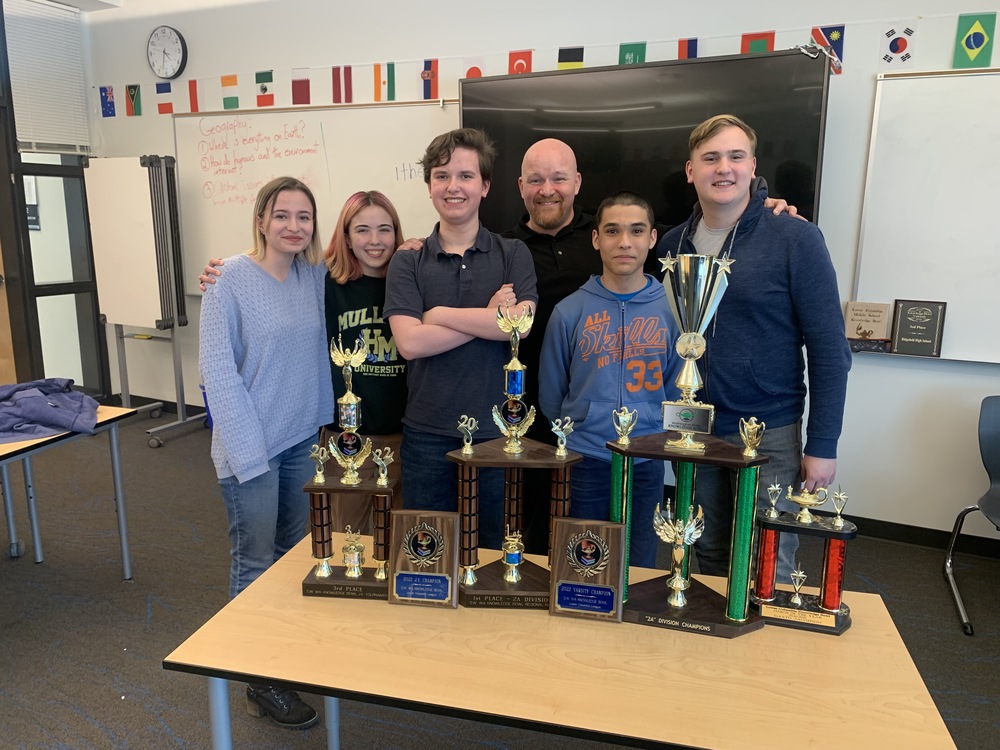 In an unprecedented win, Ridgefield High School won the National Knowledge Bowl championship on Saturday. Team members from the school were stunned and elated with their win, especially after they advanced one division to compete against larger schools. The Ridgefield High School team now stands undefeated, having now claimed first place in the league, regional, state, and national Knowledge Bowl competitions.

Team member Olivia DesRochers said the score margins during the national competition were razor thin the entire day. “We were tied with the same school, Bellarmine Prep Academy, in every round except for one.” In fact, Ridgefield’s team tied with Tacoma’s Bellarmine Preparatory Academy in the championship round as well, so it was a two-point lead in a prior round that determined their win.

Team captain Micah Ross said the extremely close competition kept them engaged. “It’s one of those things where nothing is really set in stone,” said Ross. “You’re really on your toes until the end. We had our moments with all those super close rounds, but we tried to stay confident.”

Although Bellarmine Preparatory Academy also hails from Washington, this was the first time the RHS team had competed against them.

“Bellarmine Prep Academy is usually in a different division in state,” said coach David Jacobson.  “We were up against Charles Wright Academy at state, and they were a juggernaut. We were the underdogs even then.”

But the Ridgefield High School team wasn’t intimidated by the prospect of facing off against two well-funded private schools; they knew that their performance would showcase the hard work and practice they put in before each match.

Knowledge Bowl questions are challenging for scholars of any age. The event is similar to Jeopardy, with rapid-fire questions covering a broad range of subjects. For example: “Equilibrioperception is commonly called the sense of what?” The answer is “balance.”

And “What is the constant of proportionality if y varies directly as x, and y=10 when x=7?” The answer is 1.42857, or 10/7 if expressed as a fraction. While each student specializes in one or two subjects, students are switched out at the middle of every oral round, so the team as a whole has to be prepared for any topic.

The competition was held online again this year due to COVID restrictions. Instead of traveling to a national event, the group gathered at team captain Ross’ house at 7 a.m. for a full day of competition. After the written round and four oral rounds, the top three schools across all divisions faced off. “The tension was palpable,” said team member Adam Ford.

Ford, Ross, DesRochers, and team members Emiliana Newell and James Haddix were astonished to find themselves tied with Bellarmine Preparatory Academy again in the final round. It wasn’t until well after the final round that the team learned their two-point lead from a previous round was the difference that earned the team a national championship.

The national championship win hasn’t really sunk in for the team yet. When asked about their plans to celebrate, DesRochers laughed. “I get one day off to enjoy it, then I have two AP exams to study for.”

Coach Jacobson, however, is already looking ahead to next year. He hopes to fundraise enough to take the team to the National Quiz Bowl in Atlanta, Georgia. While Quiz Bowl differs from Knowledge Bowl, it is similar enough that Jacobson knows the team can handle it. “It’s a different study strategy,” Jacobson said. “But I ran some practices with them, and they are way better at it than I thought they would be.”

So next year, Knowledge Bowl and Quiz Bowl teams nationwide will have to watch out for the small-town competitors from Ridgefield High School.

The championship team members thought about what advice they would offer future Ridgefield High School Knowledge Bowl participants. DesRochers said, “Don’t be intimidated. Big schools and prep schools seem intimidating at first, but they’re no better than a small school in the middle of nowhere.”

Ford agreed. “At the end of the day, prep school students are still just teenagers.” The whole team laughed, having just faced down some of the top schools nationwide to claim their title.

Team captain Ross, who will graduate next month, gave credit to coach Jacobson for the win as well. “We have the best coach of all. What we lack in size, we make up for in great coaching.”

Jacobson, in turn, didn’t hesitate to credit the entire team for their incredible season. Beaming with pride, he declared, “They can beat anybody.”

With a national title under their belt, it is absolutely true. Ridgefield High School’s team earned the national Knowledge Bowl championship, proving that Ridgefield schools are not just pursuing premier, they are achieving it.