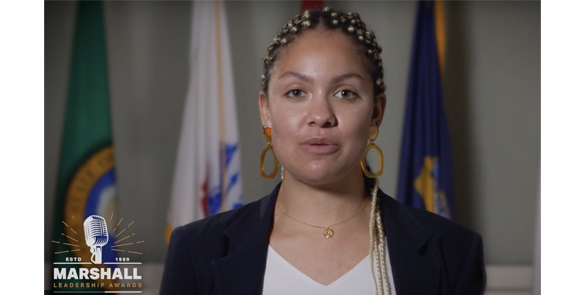 Ridgefield High School senior Charlie Fisher was named the winner of the 2022 Marshall Youth Leadership Award! Named for General George C. Marshall, the former Vancouver Barracks commander who won the Nobel Peace Prize for his work as President Truman’s Secretary of State, the award recognizes outstanding youth leaders in Clark County. The Historic Trust, which co-sponsors the award with the City of Vancouver, issued a statement reading, “Fisher stood out among a record number of remarkable youth applicants due to her passion for education as a way to build bridges, and her service to young people.”

By winning the Marshall Youth Leadership Award, Fisher will receive a $3,500 scholarship that she will apply toward her studies at the University of Richmond in Virginia. She plans to double major in PPEL (philosophy, politics, economics, and law) and French.

Fisher is an active community leader in Ridgefield. Fisher and her best friend, Sajel Antal, are the co-founders of Unite Ridgefield, a student organization at Ridgefield High School that seeks to work toward social justice and positive community change. The name was chosen intentionally. “Unite Ridgefield sounds like a way to make change,” Fisher said. “It’s an action, not just a high school club.”

They had the idea for the club soon after Antal moved to Ridgefield. “I had lived in Ridgefield my whole life,” Fisher said, “and I was used to being the spokesperson, because I was often the only person of color in my classes at school. But Sajel was new here.”

They approached French teacher Rebecca Frommlet to discuss creating a new club, and Frommlet became the club’s sponsor. “At first, we didn’t know how to form a group—or even if anybody would come,” Fisher chuckled. “Our goal was just to meet during lunch, to create a safe space for people of color and LGBTQ+ people to discuss and bring awareness to systemic racism and discrimination.” But it didn’t take long for the group to find ways to work toward change.

The school’s Associated Student Body (ASB) held a “Confidence Day” to promote student self-confidence, and Unite Ridgefield members were concerned that the messaging seemed to target females more than males. So they met with members of the ASB. The two groups had a productive conversation about how the wording of the messages could be more inclusive, helping to make a positive change to the school’s culture.

Unite Ridgefield’s next effort was a schoolwide campaign, “Culture is Not a Costume”. They designed posters to build awareness around Halloween costumes that could be seen as cultural appropriation, like sombreros, kimonos, or blackface. The campaign was so successful that some posters are still up in classrooms and the ASB office three years later.

In 2021, Unite Ridgefield’s impact went citywide. Group members wrote a letter to city council in support of a Pride Month proclamation for the City of Ridgefield. Fisher was surprised and delighted to find that the proclamation itself recognized Unite Ridgefield as one of the local advocates and organizations supporting LGBTQ people and fighting discrimination.

Unfortunately, Fisher and other members of Unite Ridgefield found themselves in the middle of a political controversy concerning the display of Pride and Black Lives Matter flags at the high school. Unite Ridgefield felt it was important to provide a student perspective on the issue, and several of them signed up to speak at a school board meeting in support of the flags, while many other community members attended the meeting to voice their opposition to the flags.

“It is a day I will never, ever forget,” Fisher said. “It was a really emotional meeting. A lot of people were involved, and it got pretty loud and rowdy. It was a turning point for me; a moment to see what the rest of my life could look like, seeing how my biracial family, my peers, were being affected by this. I’m grateful that there was a group of adults that saw us and heard us advocating for ourselves.”

After successfully having their points heard, the meeting led Fisher and Unite Ridgefield to discuss next steps. “It gave us strength in the face of adversity. What do we want to do to move forward? How are we going to keep this going? Clearly, the work here is not done.”

Fisher spent last summer working with other community organizations, but her heart remains in Ridgefield. “This community is my home, so I prioritize Ridgefield the most,” she said. And she has worked hard to ensure that Unite Ridgefield will continue to provide a youth perspective on important social issues even after she leaves for college. “We have a great group of kids now. Our focus this year has been transitioning to a new president and vice-president, so they can carry on the legacy.”

While she is graduating and heading off to college in just a few short months, Fisher has no intention of curbing her work fighting for social justice. “If we touch at least one human in this community, that can make a difference,” she said. “That’s how you dismantle systemic racism and discrimination.”